In Civil Protective Custody, law enforcement admits males and females age 14 and older for to be medically supervised when chronic addiction or episodic alcohol and/or drug abuse makes them a danger to themselves or others. Based upon state statute, clients in this program stay up to 24 hours or until released to a responsible friend or family member.

In 1979, the Nebraska Legislature passed legislation decriminalizing public intoxication in the State. But the need still existed for a place where intoxicated individuals could stay if they appeared to be a danger to themselves or others. Since the early 1980’s, our organization has served as this safe and caring place.

Every admission into Protective Custody offers an opportunity to intervene with that person regarding the actions they took that caused them to be admitted.  By law, admission to our facility is not considered an arrest but rather entrance into a substance abuse treatment program.

If our CPC program did not exist, persons admitted into our program would instead be lodged in a jail facility.   Jails would be overflowing every weekend, and the cost to taxpayers would be enormous.

Have you been asked to be a Responsible Party?

If you’ve received a call from The Bridge to ask  you if you would be willing to serve as a Responsible Party for someone admitted to Civil Protective Custody, please consider the following:

Hello, This is The Bridge Behavioral Health calling. We are Lincoln’s Protective Custody program. I am calling on behalf of a client that was brought to us by law enforcement who gave me your name and phone number as someone who could possibly sign them out and be responsible for them until they are sober. Do you know ____? Would you be available to pick him or her up and

Agreeing to be a responsible party is a serious matter. If you are uncomfortable caring for this individual while they are intoxicated, you have a right to say no. The staff at The Bridge will work to keep them safe until they can be discharged.

Are you concerned about your friend or family member and think they may have substance use disorder? 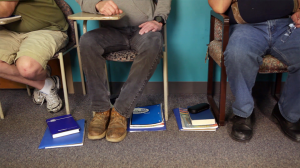 “My life was a tornado, a wreck. Now I have self-worth and I’m giving back.”
– Randy, Graduate
Menu